The term cancer is used to describe a large group of diseases characterised by abnormal, invasive cell growth. These uncontrolled cells divide and attack tissues throughout various parts of the body. Cancer cells are able to spread and invade different areas of the body via the blood and lymph systems.

There are over one hundred different types of cancer. Often cancers are named after the organ in which the disease first develops. For example, cancer that originates in the lungs is referred to as ‘lung cancer’, although it may spread to other parts of the body.

Globally, the World Health Organisation (WHO) recognises cancer as the leading cause of death. In 2008, cancer was responsible for 7.6 million deaths worldwide1. According to the WHO, approximately 30 percent of deaths due to cancer are a result of lifestyle choices. Physical inactivity, tobacco and alcohol use, sexually transmitted HPV-infections, obesity, pollution exposure, and poor diets are all significant risk factors that can lead to the development of cancer.

Blog from Bill Ross
So, what do we, the private individuals of this world actually know about cancer? The truth is, that unless we become directly involved with it, virtually nothing. I think I probably know more than most after creating this website. I have to say that it is the saddest thing I've ever done and I frequently shed tears as I progress through the stories and pictures, but I'm glad I'm doing it because the world needs to know how harrowing it can be. On a daily basis, when we hear the word cancer, a word is all it is to most of us and we don't know how awful the actual disease is. We don't know the daily 'hell' that the victims and their families go through, before death eventually comes and, sad to say, often brings relief.
Cancer is a cruel disease, mainly because its final outcome is known, but it drags its feet. Therefore, its victims know they're going to die, but not necessarily when. It's tantamount to being on death row in an American prison. Most of the men on death row deserve to be there because of what they have done, but the victims of cancer do not deserve the 'punishment' that this wicked disease hands out.
On this site, most of the wicked disease's victims are children, even worse, they are pre-teen children. Unlike the older adult victims, they haven't even had a life. What makes it worse still is that they are all beautiful, very brave and pleasant children, which leads to the question, why them.
I've never had cancer and neither has anyone in my family, fortunately. You may be wondering why I developed a taste for creating this site as I have no connection with the disease. You may also be wondering about the two photos below this text. The photos are of me when I was a child and you can easily deduce, that as a child, I became very connected with hospital. In fact, between birth and the age of 16, I had spent more than half my life in hospital - at one stretch it was 5 1/2 years without ever going home. With that in mind, it can be quite easy to understand how much I sympathise with children in hospitals suffering awful diseases. My disease was TB and in those days, survival was negligible, but as with cancer, it did have a few survivors and I was one of them.
I was in Sheffield's Children's Hospital, long before it was the shiny new building it is today. It was comprised of mainly the old section that, gladly, still stands at the east side of the hospital today. I believe I was there for about 2 years before being transferred to the King Edward the 7th Hospital in Rivelin, Sheffield, where I stayed for another 3 1/2 years until my mother had to ask the doctors, "Am I EVER going to get my son back, or not?" With that, they let me out for a short period, but not long after I was back in again, then out, then in and so on.
So, because I was suffering from a potentially terminal and highly contagious disease,  I can, to a point, identify with the children and their parents whose stories are on this site. God bless you all, and thanks for visiting my site. 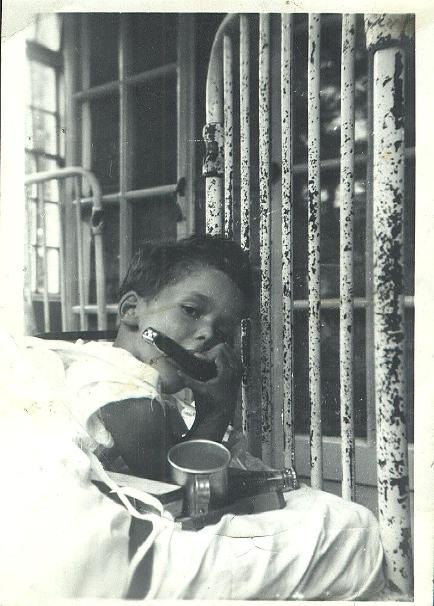