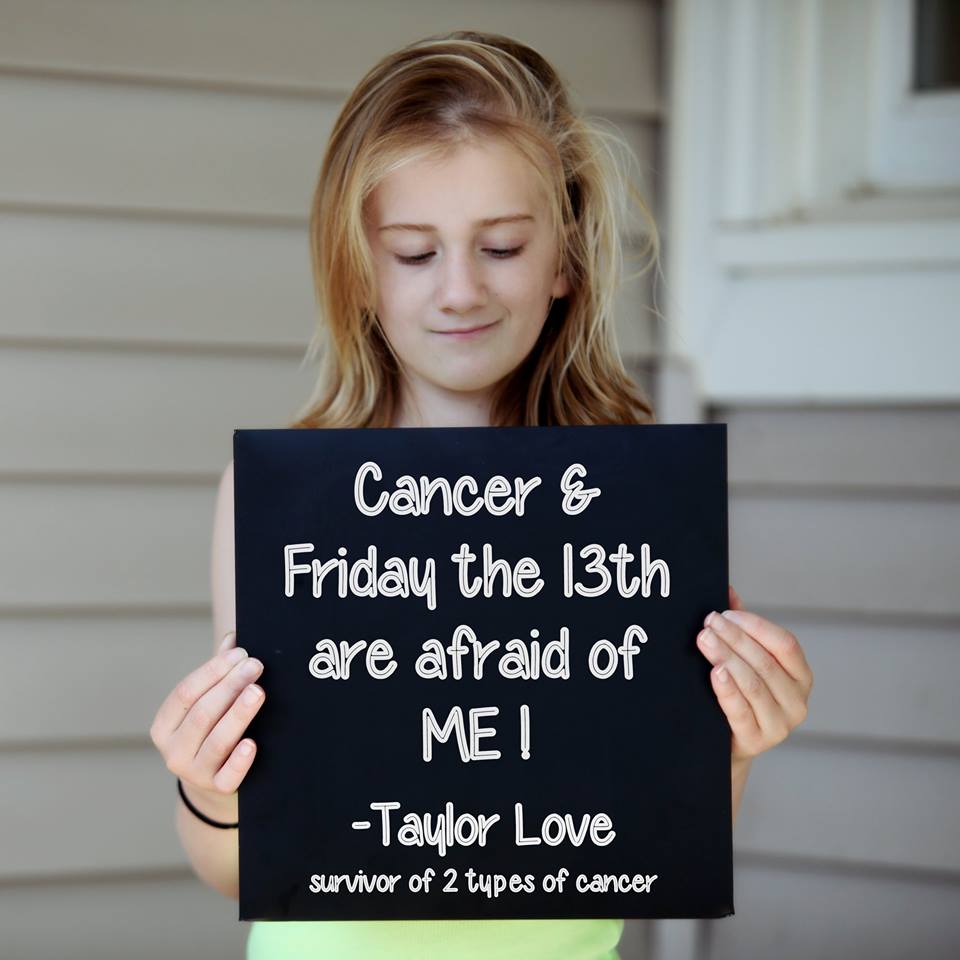 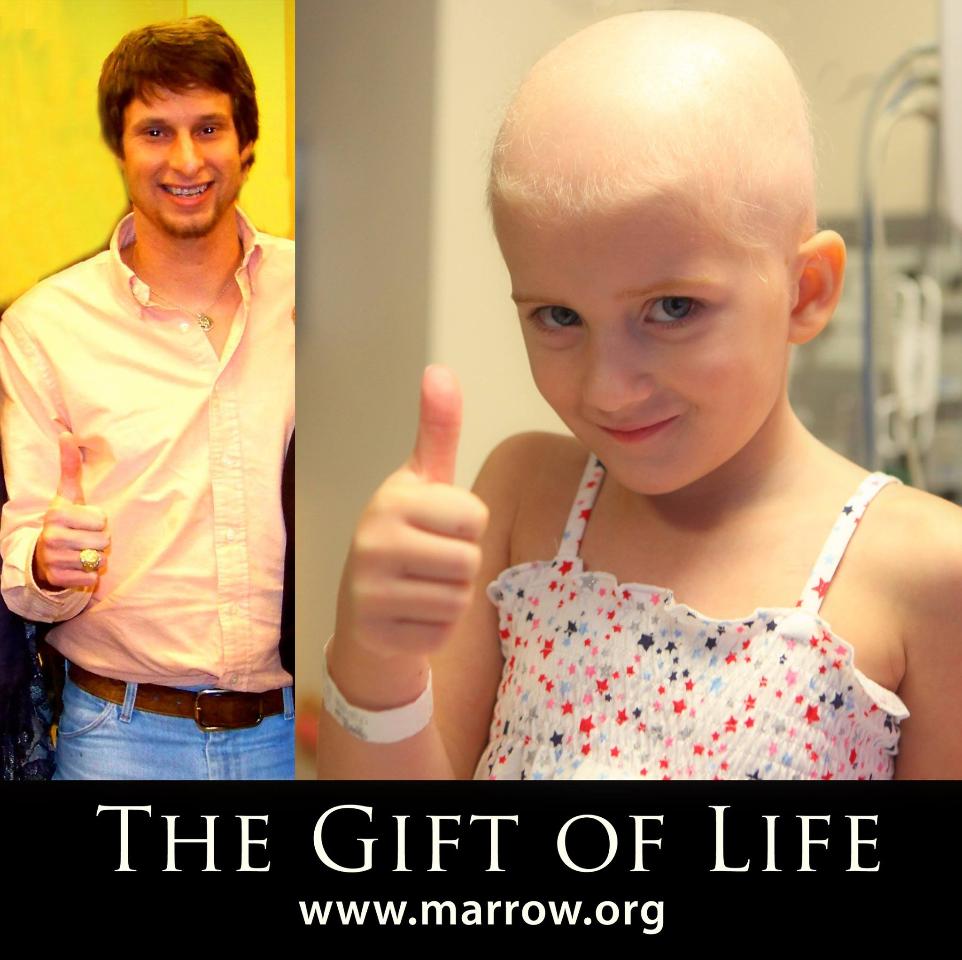 Thumbs up to 2016 and to all of the promise that it holds. Also thumbs up to heroes like Trevor Tumlinson who saved Taylor's life by donating his bone marrow in 2010! 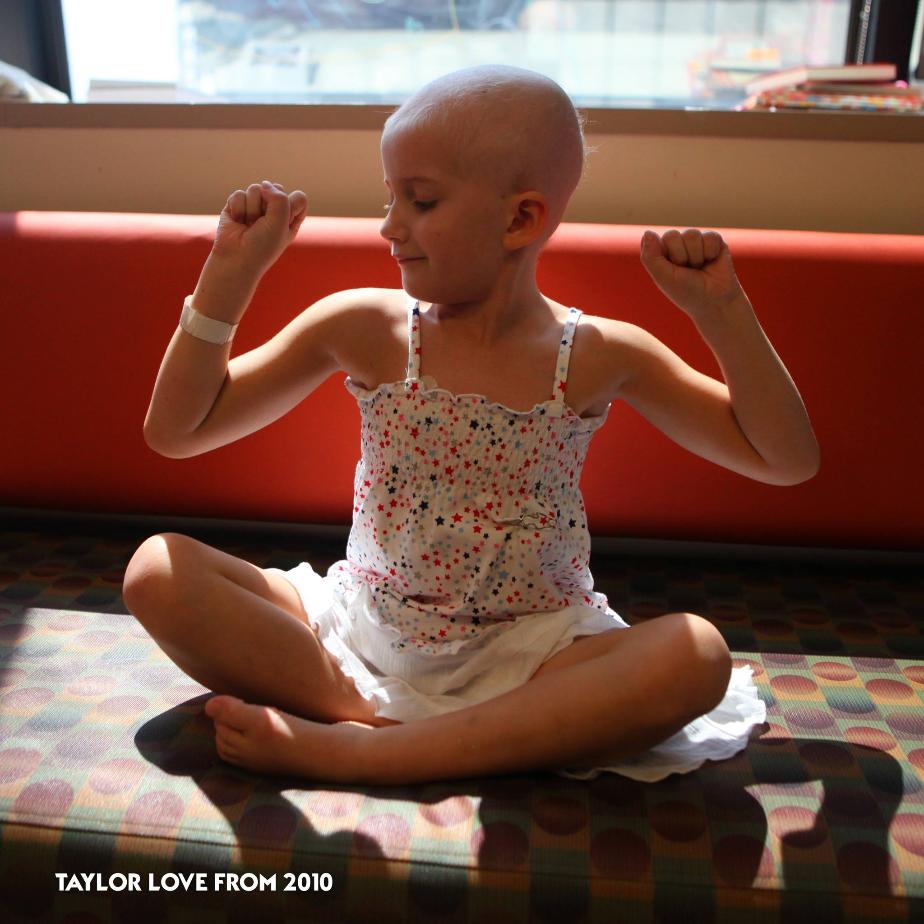 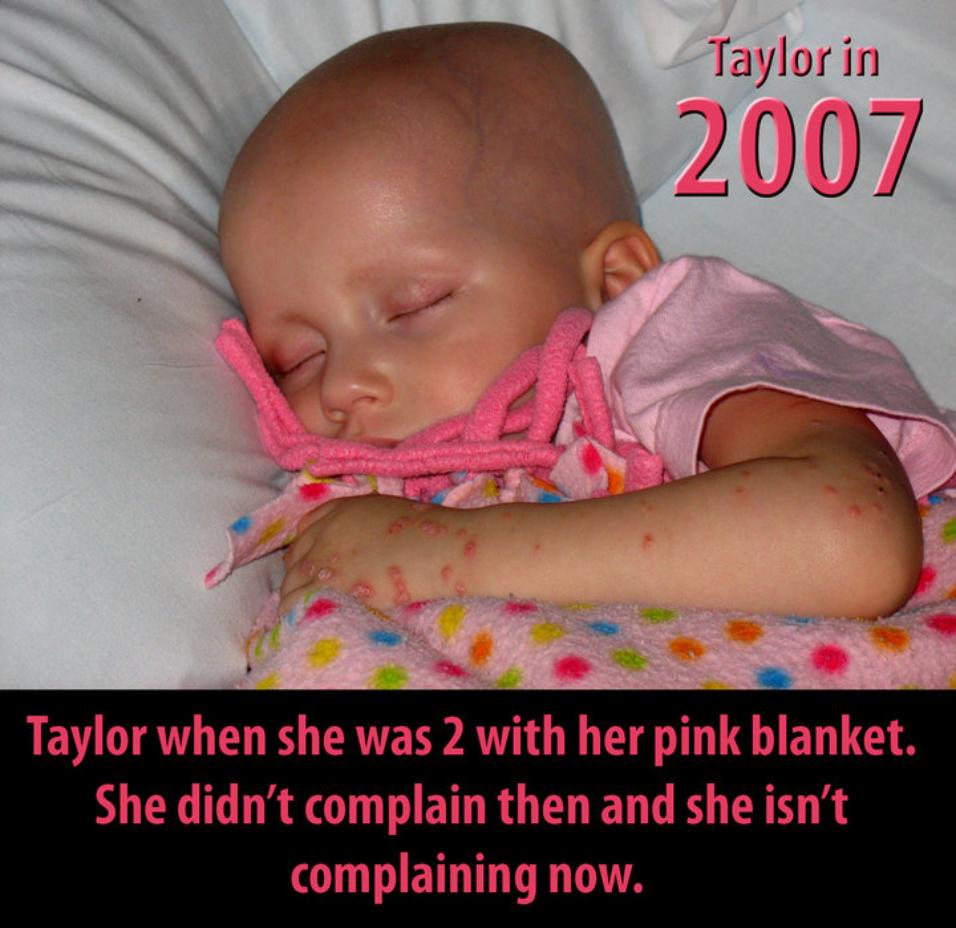 Taylor hasn't complained once about being in the hospital. She knows she has work to do to help her blood not be sick anymore. She's certainly loved by many of the staff here, doctors, nurses & techs who previously cared for her when she was 2 continue to drop by for daily visits. Taylor, her pink blanket and pink pillow have been well remembered & welcomed back with open arms. (go to taylorlove.org for full posting.)
— with
Sierra Nicole Weaver
.
Taylor Love is a two times cancer survivor. When her cancer was 'new', Taylor was befriended by an older girl called Abby Miller who decided to work tirelessy to raise funding for Taylor. 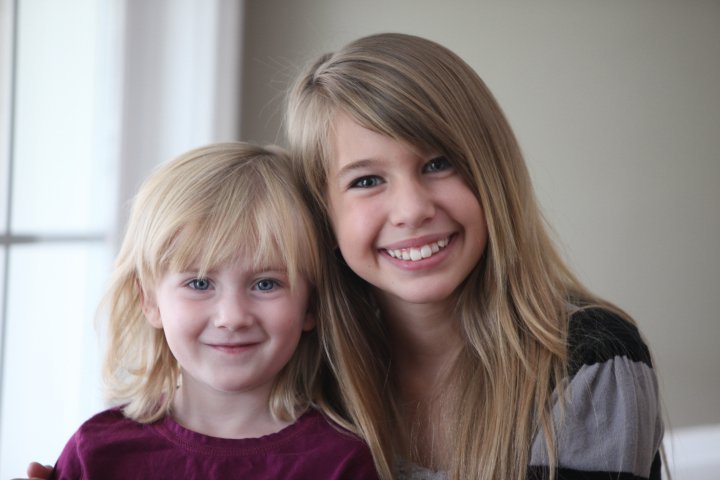 Taylor Love was a happy, healthy 18 month old. But a bruise and a lazy eye proved to be more than just that. She was diagnosed with stage 4 neuroblastoma. She had 7 rounds of high dose chemotherapy, a surgery to remove the tumor in her abdomen and a stem cell harvest. She completed several rounds of a phase I clinical trial which included immunotherapy treatment and IV radiation. She underwent radiation treatments to her head, orbits and abdomen and a phase II antibody trial. In 2010, she was diagnosed with MDS - which is a form of chemo-induced leukemia. Taylor underwent a bone marrow transplant in August 2010. In February 2010, her kidneys failed for no apparent reason. Recovering from that, a routine bone marrow test found neuroblastoma cells. A miracle happened and no more cells have been detected since. Recently, a scan showed a mass on Taylor's liver. 6 weeks later, it had grown significantly. A surgery to remove was performed and another miracle has happened. The mass is benign. Taylor is now recovering from surgery. Please continue to pray Taylor remains cancer free and she recovers smoothly.
Meet Taylor Love - Taylor Love's Cancer Journey

Taylor was born in June 2005. 18 months later, her parents sensed that something wasn't quite right. Taylor was taken to the ER where, for the first time, her parents heard the words “cancer” and “Taylor” in the same sentence. Taylor was admitted to hospital and was diagnosed with stage IV, high risk neuroblastoma, a deadly childhood cancer with no known cure.

The diagnosis led Taylor down a treatment path that included high dose chemotherapies, surgeries, clinical trials, IV radiation, direct beam radiation, many transfusions and months in hospitals.  After 3 years of treatments Taylor was considered NED, No Evidence of Disease.

Cancer treatments can be both a blessing and a cure.  The very treatments that helped kill off the neuroblastoma led to a secondary cancer; MDS, which is chemo induced leukemia.   The treatments she had received to fight off the deadly neuroblastoma were now wreaking havoc.  Within weeks Taylor was back in hospital for more chemotherapy. A bone marrow donor had been located and on August 13, 2010 Taylor received a whole new immune system with a bone marrow transplant from an anonymous donor.  Taylor spent more than 70 days in the hospital, literally fighting for her life, again.  And Taylor was victorious once again.

Side effects to cancer treatments can be horrendous, difficult and even deadly. Taylor has withstood many side effects and will continue to grapple with side effects for the rest of her life.  She suffered kidney failure on 3 occasions, the first of which led to her being detained in ICU and consequently, she required dialysis.  Taylor’s kidneys continue to be problematic, her endocrine system has taken a hit, and the growth in her upper pallet is minimal due to radiation.  Her blood pressure is constantly monitored, her suppressed immune system managed and an eye kept on her health and day to day activities.

In 2015, we are approaching 9 years since diagnosis.  Taylor just turned 10 and despite everything, she is happy, active and full of energy.  Taylor will enter 5th grade this year, and one would never know what she has been through. 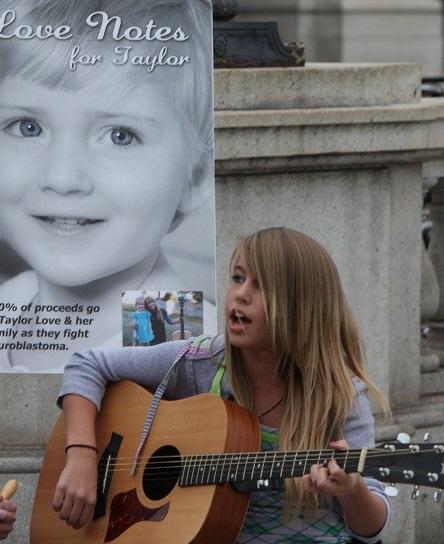 Abby Miller is a young musician with a big voice and an even bigger heart. CBS News has called Abby "a cross between Miley Cyrus and Goodwill Ambassador." Though only 13 (in 2010), Abby has chosen to use her musical gifts to help children in need. In less than 4 years, Abby has reached over 5 million people with her message of hope, courage and compassion. During the past 3 years Abby has helped raise over $400,000 for childhood cancer research.

Out of love for her friend, Abby took her other passion, music, and decided to use it to raise money and awareness to help Taylor. Abby adopted the motto “her battle is my battle”, and today she has raised over $400,000 and helped not only Taylor but countless others fighting the same brave battle as her friend!

This video shows Abby making a public service announcement on behalf of her friend Taylor. 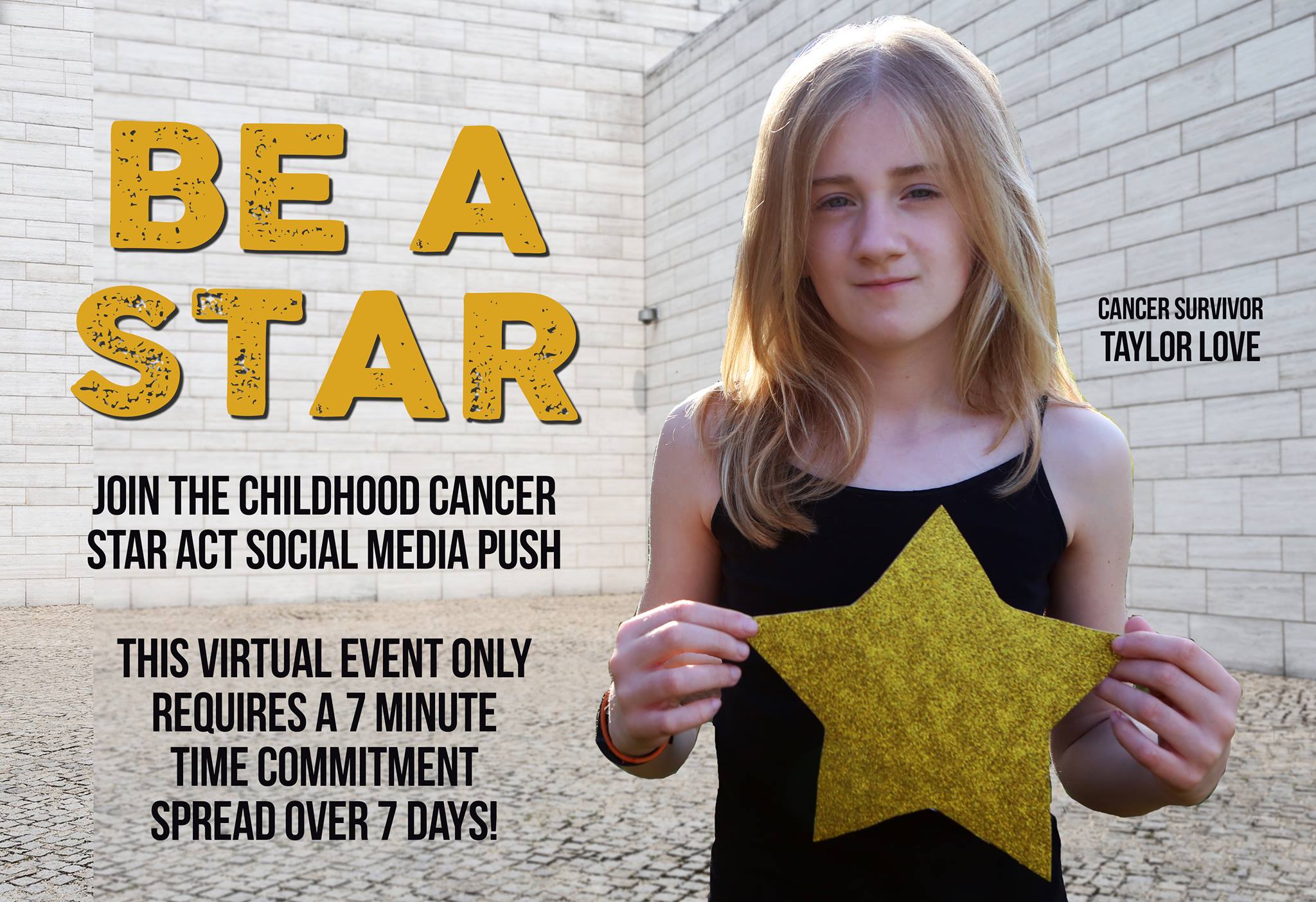 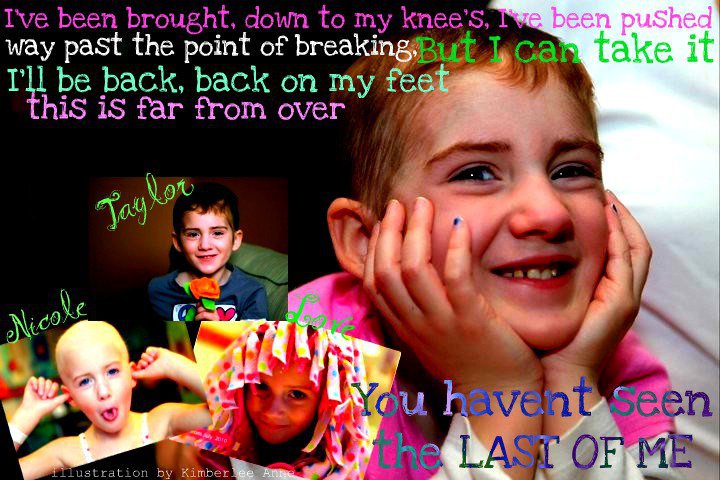